A contributor to our very first issue, Lavinia Singer was at the time transitioning into her new role as Assistant Editor for Poetry at Faber & Faber. A couple of years on, we took the chance to ask her about the intersections between poetry and publishing, and breaking new ground in the world of books! – The Editors

Publishing, editing, academia, criticism, and of course, writing poetry – there isn’t much in the book world you haven’t done! How would you describe your journey so far?

It’s been varied, winding and largely unmapped. I left university with quite a broad aim of ‘working with poetry’, rather than a specific goal or career path in mind. This has led me down a mixture of avenues: from the paid to non-paid, part-time to full-time, working alone to being part of a team. At first I interwove volunteering and internships with study, tutoring and visitor service jobs, aiming to find some kind of balance that would enable me to keep writing (the lodestone). That kind of juggling revealed different aspects of ‘the book world’, but also my own preferred working and writing habits and what might suit them. There have been definite ‘dead ends’, moments of frustration or stress. Perhaps, looking back, I can find value in those experiences, even if only the connections forged that led on to something new. Above all, I’ve enjoyed working with different kinds of people – ‘fellow travellers’ who share an enthusiasm for poetry, words and books.

An oft-Googled question is the difference between a publisher and an editor. With experience in both – could you talk us quickly through the distinction?

There might be a more formal definition, but from my experience: I think at different publishing houses the roles may be more or less distinct. ‘Publishing’ is a broad term incorporating various departments, of which ‘Editorial’ is one, and so I’ve heard the two words used synonymously. But, when used in the way of your question, the ‘Publisher’ would most likely be the representative of a publishing house, with a higher, more managerial role: leading and overseeing the Editorial department, working more closely alongside the executive team. An ‘Editor’, meanwhile, would refer to the individuals who make up the Editorial department, heading up different lists or imprints and generally supported by Assistant or Commissioning Editors, or Editorial Assistants.

Having worked in poetry publishing at both Enitharmon and Faber, are there any parts of the process which were surprising or unexpected?

Both Enitharmon and Faber are independent publishers – quite a special breed these days – with their own cultures and working processes. The much smaller team at Enitharmon meant that everyone had awareness of or was involved in most aspects of the day-to-day business. From 2013, the office was based at a gallery–bookshop, which meant being public-facing: meeting customers and receiving direct feedback, with the additional need to dress up and maintain the space, hosting events and exhibitions. The work was therefore incredibly varied, ‘on’ and ‘off the page’. Alongside poetry, Enitharmon publishes artists’ books – often collaborations between artists and writers – which slip into a very different kind of ‘book world’. We’d exhibit at fairs such as the London Original Print Fair or the London Art Fair, appealing to collectors with fascinating quirks and buyers with other desires: those who might admire the book primarily as an art-object, or only purchase certain numbers in a limited edition series.

Faber is larger, which means coordinating with various departments. It’s inspiring to work with such skilled specialists in each field, and witnessing how much goes into each part of the process: from Contracts and Rights; Design, Pre-press and Production; Marketing, Publicity and Sales. I was surprised to discover that Faber still accepts unsolicited submissions for poetry – although the challenge is balancing the acquisition of new books alongside the commitment to existing authors and estates. I’ve also learnt more about typesetting – how to balance a well-respected tradition of book design, while also attempting to cater for each book’s particular needs – and the physical production, including paper and binding specifications, alongside visits to printers. It’s also been eye-opening to learn more about the life of a book off the page (Amazon, eBooks, audiobooks), and the importance of live events for bringing books to readers.

Students are usually warned that publishing is a difficult profession to get started in. Would you agree? Are there any words of advice you’d give to someone starting out?

A benefit of publishing as a profession is that there isn’t just one way to get started. There are the more formal routes, such as internships and publishing MAs, which I imagine must be useful to give general training and an overview of the industry. However, there are also the more informal, such as being in the right place at the right time, talking to like-minded people at book events, taking on temporary positions which give particular experience and may organically and unexpectedly lead on to something else.

Although a popular profession, and therefore competitive, much of the scaremongering related to the ‘decline of the book’ because of eBooks and digital platforms hasn’t happened. Books are thriving – I read this week, in fact, that the UK book market experienced its fourth consecutive year of growth (according to Nielsen BookScan) – and, as events such as the Small Publishers’ Fair or Free Verse: Poetry Book Fair demonstrate, today’s world offers enormous opportunity for creativity and innovation. I would suggest being open-minded. A lot of people wanting to get into publishing only think of ‘Editorial’ when, as mentioned, there are many other departments that are rich and rewarding, suit different kinds of individuals, and have such an important part in the cycle of the book. There’s much to learn and room to be flexible: part-time roles can balance well with other things.

Finally, how has working so extensively in the book industry affected your writing / growth as a writer?

I was warned that working closely with other people’s poetry could be detrimental; being surrounded by others’ voices could crowd out one’s one. It certainly takes a lot of energy and creative thought. The positive side is being aware of existing range and diversity: of styles, traditions and networks. Following one’s own independent voice can therefore, perversely, be easier, as one is less likely to absorb or ape a single dominant style. Learning about what makes a ‘book’ or ‘collection’ of poetry can help for considering one’s own poems with a bit of distance.  I also found having a stable job – this could be any job! – was essential for me, to give weekly structure around which I could plan. No one can teach you this in advance: it’s a case of discovering what suits one’s own writing rhythms.

But perhaps most useful has been realising the satisfaction that can be had not just in getting one’s own writing published, in the most famous or well-known places –something which is generally out of one’s control. There are many ways of publishing and being published that are nurturing and satisfying. It has been a pleasure to work with other poets, editors and book lovers who are generous, thoughtful, inspiring and who care deeply about what they do. That way one never stops learning, and never stops loving books and the world in which they exist. 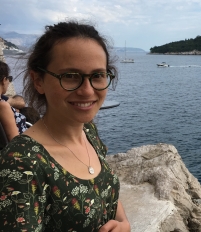 Lavinia Singer is a former editor of Oxford Poetry, and worked at Enitharmon Press from 2013 to 2016. She is currently the Assistant Editor, Poetry at Faber & Faber. Her work has been published in a variety of magazines, journals and anthologies.