Gorton. Twilight. Christmas on the way.
The mist a sill or falling like a lowered blind,

a veil across the Santa in your neighbour’s
alleyway, evening advancing from all sides

as he hangs on his glittering rope of lights –
an eyeless robber with a sack of swag.

Indoors, we squeeze the year out of a box
of wine, tilting the crumpled bladder of the bag.

I knock it back: twelve months when days
were small doors printed on an advent scene,

some unknown threat behind each one.
Outside, fog switches off the city’s screen.

Your house asleep, I’ll take the woodland path
to Tesco, stand in the bright aisles

and stare out at the cereal-box nativity, red,
white and gold with the face of a child.

A friend of ham is a friend of ours
declares the 2D pig. I’m drinking
stout the colour of burnt toast, watching a man
sleeved in tattoos cut slivers of jamón ibérico,
the flesh almost translucent on the plate.

Each time you lie, you shed another skin.
A papery lookalike goes strolling
down the street you said that you were on.
I scan the crowd outside for someone
with your shape, your stride, until the road

becomes an outline of itself, as realistic
as the dotwork map of Spain that fills the wall
behind the bar. A giant cheese wilts
underneath a grill. Raclette, a couple
giggling at the smell. The waiter stoops

and sloughs the top layer off. I sip
until there’s nothing left and smile at him,
the glance returned, and then we turn
back into separate silences, wearing them
well, our hurts becoming us. 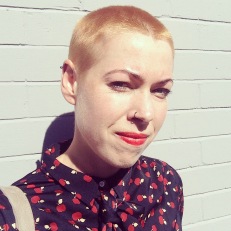 Helen Mort was born in Sheffield. She is the author of two poetry collections, ‘Division Street’ (2013) and ‘No Map Could Show Them’ (2016), both published by Chatto & Windus. She’s also the editor of ‘Lake District Trail Running’ (Vertebrate) and ‘The Owl and the Pussycat’, an anthology of poems for children. Her first novel is forthcoming from Chatto & Windus and her first collection of short stories is forthcoming from Wrecking Ball. Helen is a lecturer in the Manchester Writing School at Manchester Metropolitan University and occasionally writes for Radio 3 and Radio 4.