I reread a chat
Log, from three years back – I was
Searching for something and I found
Myself: stood as vulnerable and bare
As road-kill.

It is like seeing
Your parents having sex you know
It must have happened at least
Once but suddenly it is more than
A process, it has become an
Occurrence.

There is something like a horror
Film inevitability to it – I wanted
To lead her away to teach her how
To curl her back like an armadillo but
It is already too late.

I once started
Crying because of an argument
Someone else was having.

I thought that if I became
Scarred at the edges I could some
Day become as hard as rubber.

That strange sensitivity,
The sound of my blood desperate
To move elsewhere.

Almost a year has passed. 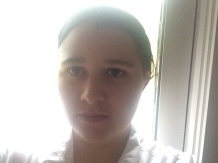 Freya Jackson has previously been published in places including Arc Magazine, Magma and The Interpreters House. Her poem ‘Cowardice’ was Ink, Sweat and Tears August pick of the month and her long hyperlink poem ‘The Regan Project’ can be found at www.pothook.co.uk