Post the last therapy session, I am spent – cernuous nearly – in the penetrating confines of a glass-walled cabin that cozies up to the Bombay skyline. My feet swollen to church bells from the daylong sadism of new heels, my eyes puffy & volcanic towards evening’s rush of traffic, my mind collapsing on itself  as I contemplate the journey back home  – what Dante once described of hell – “solid darkness stain’d”. This failed bottling of my vertigo from the 30th floor of a suitably rakish highrise. A clique of billboards punctuate the convoluted text of a formless road and I am questioning the loud appetite of pigeons. The slategray of their backs silvered by the evening’s luxuriant gaze. June scrawny in the dusk’s  grooved throat – all that chillpowder red gashing  my window’s vitreous biases. This city is a blackglow hourglass viced to leak time at the most erratic interludes;  always the butoh of some new ghost hissing out from its loosened sand. There is no politeness to a force majeure. It does not knock for permission. It does not scrabble for steps. There is no clean way to love this city –  to wade through the voltage of arias bubbling up in its surging gutters, to neatly disseminate the archivals hunching its highways. The contradictions of its body – battered coops, hived abrasions along the fishing nets – light ranking the depth of each incision it enters into the plump vein of its insomnia.

You can’t stray untouched – its torsion demands a music of passionate dissonance. Sometimes the salty wander of a sea culled out from its diasporic howl. Sometimes the animal jelled in its own oils, releasing newer distortions into the arrant machinery. You slowly grow distant from your skin. You learn to recognize your voice only when it is set to ricochet against the footsteps of others, as chimerical and as incongruous as the moon’s aphasic compass.

You learn to navigate your own insatiability.

“The great betrayal is to possess the ability to ask about that which we don’t yet have the words for.”

What won’t we have words for?

For the way you broaden with a kind of retroflux; dreams lavished on ubi sunt, the morning bandaging shipyards with a muster of guillemots. For the way light sears the silver brim of your hair – arrowheads, roman candles, hocked up chapters of someone’s life in a pawnshop locket, the edge of a lake teased by lightning’s lofty tongue.

For the scanting; this brevity of my neck-hollow against the logorrhea of your hands. For skin gemmed purple with its flourishing kinks.

For the emptying – bodies blooming in chemical baths, bodies of smokedrift in copal incense, bodies of nights more bitter black than theobrama cocoa , bodies of sangria-scented bloodrush held under the tinny urge of tapwater.

Every day, I run for miles. I think of him asleep – tiger lilies bundled in shantung, left on an airport chair – and my wanting is a cult of American bison crossing the blurred silence of a cauterized river.

Antelope, it is your shape breaking open the curve & season of every forest I have dreamed of, wandered in, lost myself to. You know the dictionary of my wars. The riven soldier in me is loose wax fusing into the heated brass of your lap. The way you draw antlers out of my battlewounds – your fingers reimagining the totemic cuts on my forearms into birdwings.

I pray and I think of hunger. Like any good fire, I must eat and kill or (eat) and die.  The only grey is the aftertaste of my ash, its cold tilism priming the air with a new hunt.

As a tutored dog, I will heed my leash while my body aches itself into a single, sharp tooth. An ankh, a tusk practiced into a knife. To make up for the lack of you, I am digging into every rendition of flesh – from fruit to fabric.  In a doorway, my shadow is so dark, it shuns gravity in a murder of crows and your dull yellow dress is a moon-swept sea speeding towards me. You, saffron finch, upturned yolks of Carolina Jessamine, January’s sunbaked garnet.

I am a kingdom of blind arsonists.
You are how rain makes cities out of stones.

Your arched back against the sleek marengo of my chair; ocelot sparkling behind a bonfire. Desert’s first puzzle, threadbearer, a map of lost music. I am sitting here with this almost finished page & I want my mouth to be a loanword from a foreign language. A poem buried in sugared ink, dried on ricepaper, slowly coming to life against the bodyheat of a new light bulb. 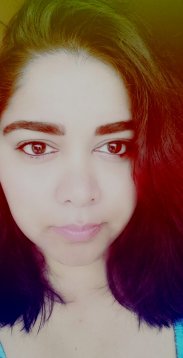 Scherezade Siobhan is an Indo-Rroma social scientist, community catalyst and hack scribbler of two poetry collections: Bone, Tongue (Thought Catalog Books, 2015) and Father, Husband (Salopress, 2016); and one poetry pamphlet, to dhikr, i (Pyramid Editions, Forthcoming in 2017). She is the creator and curator of The Mira Project, a global, cross-cultural dialogue which uses expressive art and storytelling to dismantle gendered violence and street harassment. Her work is featured or forthcoming in Feministing, Berfrois, Rattle, DIAGRAM, Queen Mob’s Teahouse, Word Riot among other digital and print publications, anthologies, exhibitions, art galleries and sometimes even in the bios of okcupid users. She is a Pushcart Prize and Best of the Net nominee for writing and can be found squeeing about militant bunnies at www.zaharaesque.com or @zaharaesque on twitter/fb.